Founded in 2001 and based in Toronto, john st. employs approximately 100 people and has unaudited revenues for the year ended 31 December 2012 of approximately $14.0 million, with gross assets at the same date of $5.5 million. Clients include AstraZeneca, Kruger, ING Direct, Maple Leaf Foods and Tata.

Over the last 12 years, john st. has built an international reputation as one of Canada’s leading innovative 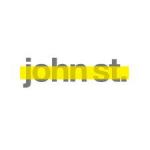 The acquisition of john st. strengthens WPP’s presence in Canada. “We see enormous value in being part of WPP,” says Arthur Fleischmann President of john st. “We’ll now be able to augment our current services in areas that clients are asking for, such as media, direct and public relations.”