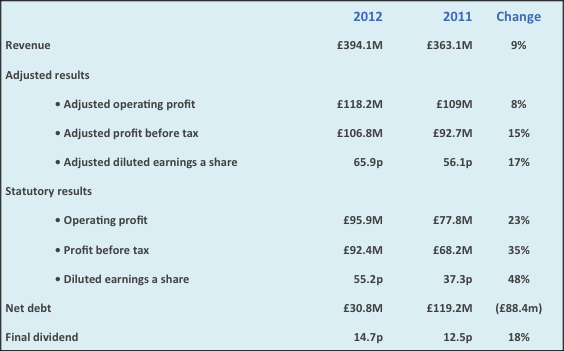 The adjusted operating margin was unchanged at 30%.  Costs, particularly headcount, have remained tightly controlled throughout the year.  At the same time, the group has increased its investment in technology and new products as part of its online growth strategy.

Net debt at September 30 was £30.8m compared with £88.5m at March 31 and £119.2m at September 30 2011.  In the absence of any significant acquisitions, net debt has fallen by £88.4m since the start of the year, reflecting the group’s strong cash flows and an operating cash conversion rate* in excess of 100%.  The group’s net debt is now at its lowest level for more than a decade and its robust balance sheet provides plenty of headroom for the group to pursue its acquisition strategy.

As highlighted in previous trading updates, market conditions became noticeably tougher from June.  The uncertainty over Europe remains, as does a solution to the pending US fiscal cliff.  Meanwhile global financial institutions face the combined challenges of difficult markets, increased capital requirements and a tougher regulatory environment.  Inevitably they have responded by cutting costs, particularly people, and exiting some parts of their business.  However, the outlook for emerging markets, which account for more than a third of the group’s revenues, is more positive. The board expects this challenging trading background to continue at least into the early part of 2013.

Commenting on the results, chairman Richard Ensor said: “The record results for the year reflect the challenging market conditions as well as the successful implementation of our strategy.  Investment in online information businesses and emerging markets has created a global portfolio with a resilient business model.  Subscription revenues now account for more than 50% of group revenues, and more than a third of our revenues is derived from emerging markets. In 2013, we will continue to invest in our products to ensure that we are well placed to benefit from any improvement in the global economy.”